At first glance, these are two very ordinary and uninspiring modern gateposts.
But on closer inspection, they reveal a remarkable synthesis of functions, features and motifs:
male and female paired standing-stones, gateposts, male and female exhibitionists,
the spirals of prehistoric and early Christian Irish decoration, and ogam script.

In this picture you can just make out a line of ogam script on each post,
while on the right-hand face of the left (Northern) post you can just discern a figure...

The figure on the S side of the Northern post is, in fact, a male exhibitionist, of a very unusual - if not unique - kind. 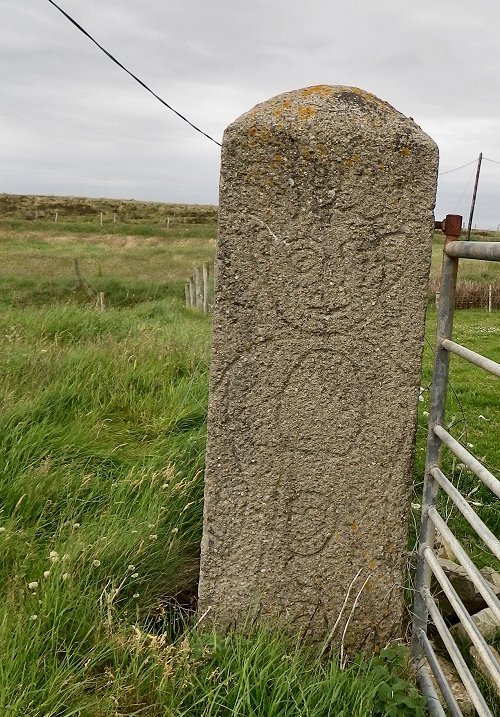 The ears are childishly large - which is a feature of some sheela-na-gigs such as those at Behy and Tullaroan.
Unlike most exhibitionists, however, the face is smiling, almost benign.
Above the head is a head-dress of some kind, or hair standing on end - also a feature of some sheela-na-gigs.
The crudely-expressed arms form a glans-shape on the chest,
while below is a crude dotted spiral representing the navel.
At the base, a stubby penis with urethral aperture is partly hidden by the grass.

On the N side of the Southern gatepost is an almost 'true', if latter-day, sheela-na-gig, with typical hair - but (again) with smiling mouth.
The breasts are indicated by spirals very reminiscent of those on west-coast cross-slabs such as Inishkea North and Kilfountan.
There are no proper arms, nor is there a navel,
but the rest of the long figure consists of an enormous vulva with well-emphasised, phallic clitoris.
The figure recalls an English figure at Oaksey (Wiltshire), and could well have been influenced
by an illustration of that figure. 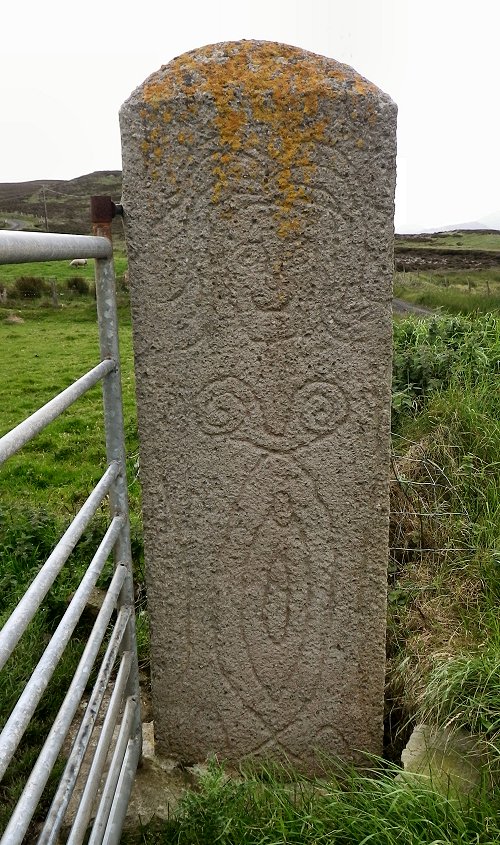 The feet are wittily suggested at the base of the pillar by a continuation of the outside line of the vulva.
On the W side of the pillar is a line of ogam script which may (or may not) give some clue to the identity of the clever graffiti artist
who sought no publicity, but performed a syncretic, artistic act in the teeth of Catholic puritan hypocrisy just past its apogee. 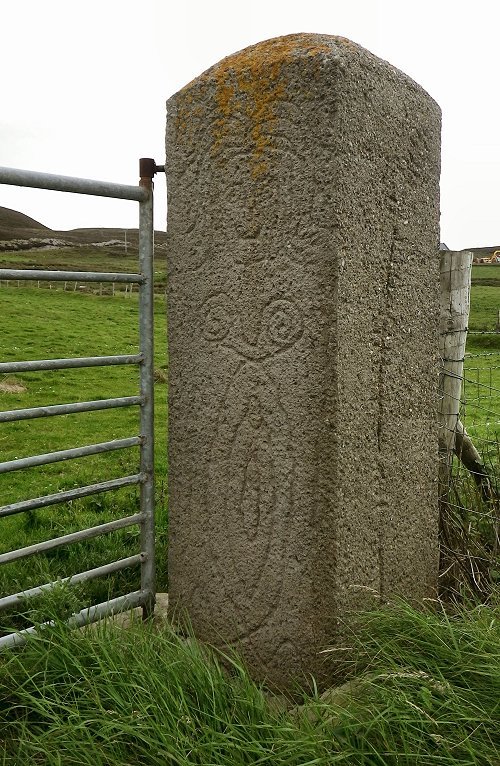 The nearest distantly-related figures are those at Boa Island in Fermanagh,
and Carndonagh and Fahan Mura in Donegal. But these gateposts arise not from local tradition
or other carvings in the area or region, but either from a literary source, or from more-than-casual visits
to ancient sites in Ireland - or both.

They are neither pagan nor pious, but display a quality very rare in Irish art : joie-de-vivre.
For these graffiti celebrate sexuality and wittily unite that celebration with ancient styles and features -

not in a pretentious art-gallery but where art and wit should be - by the roadside.

I am very grateful to Bernie Ranson for his generous communication and his excellent photos.