Glenn W.Olsen:
ON THE FRONTIERS OF EROTICISM:
THE ROMANESQUE MONASTERY OF SAN PEDRO DE CERVATOS 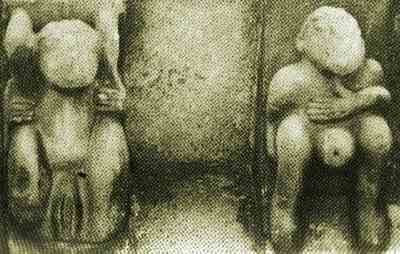 These he compares with the drinking mugs one can still buy at fairs in rural Portugal, which slowly reveal, as one drinks, an erect phallus sticking up from the bottom.

But I feel, however, that he does not sufficiently take into account the inevitable morbid preoccupation of a celibate clergy - especially monks - with sex and its sinfulness: relief and guilt. The sheer difficulty of priestly celibacy (instituted in the eleventh century) has been one of the many curses of the Catholic church and may soon tear it apart.

Olsen does not give enough consideration to the tradition that Cervatos was a collegiate church, possibly connected with something like a modern seminary, where a sad and ludicrous (not to say destructive) Catholic dogma collided with the pubertal testosteronal urges of the rustic population of a recently re-Christianised Northern Spain, where there had been relative sexual freedom for men under the lightly-Islamic Moorish rule of the previous centuries. But even if it were not connected with the instruction of young priests or monks, the sheer artistry of the corbel- and capital-carvings, executed by very competent sculptors who would not have come cheap, suggests that more was behind their execution than mere Rabelaisian frivolity. 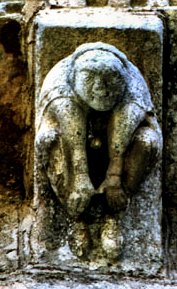 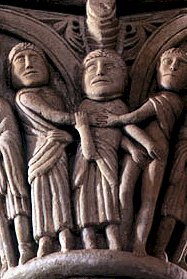 Frómista (Palencia): an interior capital and an exterior corbel.

Professor Olsen has also written about sodomy in mediæval Europe:
"The Sodomitic Lions of Granada"
in the Journal of the History of Sexuality - Volume 13, Number 1, January 2004, pp. 1-25
University of Texas Press, Austin

In a different number of the same journal he has written about sodomy in Reformation Germany and Switzerland, 1400-1600.