1. Christianised a thousand years or so later than the dolmen at Clauzel
and much less enhancingly, this tomb, still largely-embedded in what remains of its cairn,
is easy to find on the S side of the GR 46 long-distance footpath
about 500 metres SW of the church at Saint-Amans-le-Vieux, and 2.2 kms South of the mediæval village of Caylus.

If the hideous iron cross and its ridiculous plinth were removed,
it would still be unusual for the many natural basins or solution-pits on the capstone
which has been swung to one side.

I visited this tomb in February 2006, just before a deep snowfall had finally melted. 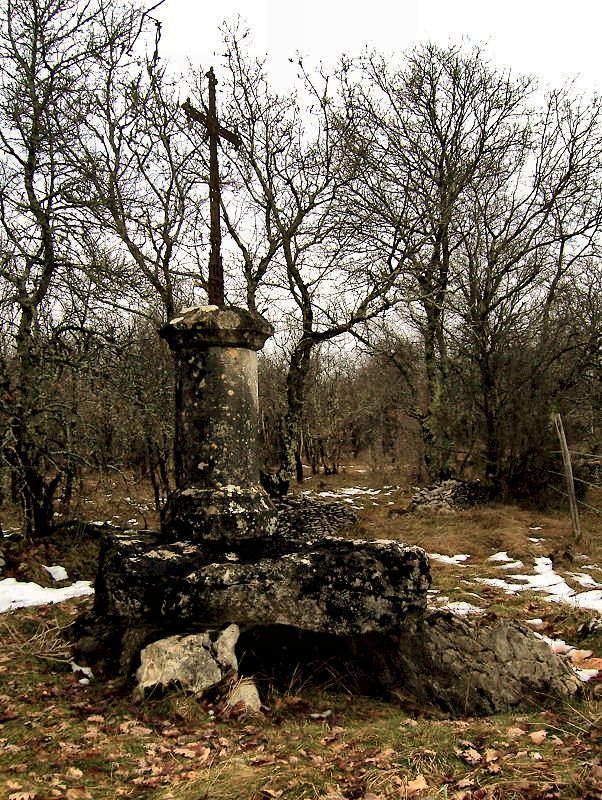 The front of the tomb. 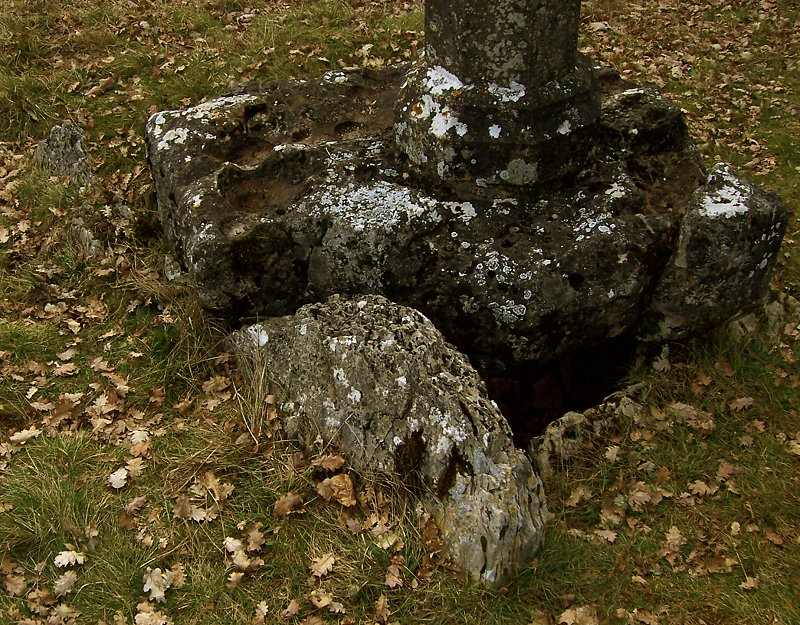 The tomb from the rear, photographed in mid-March. 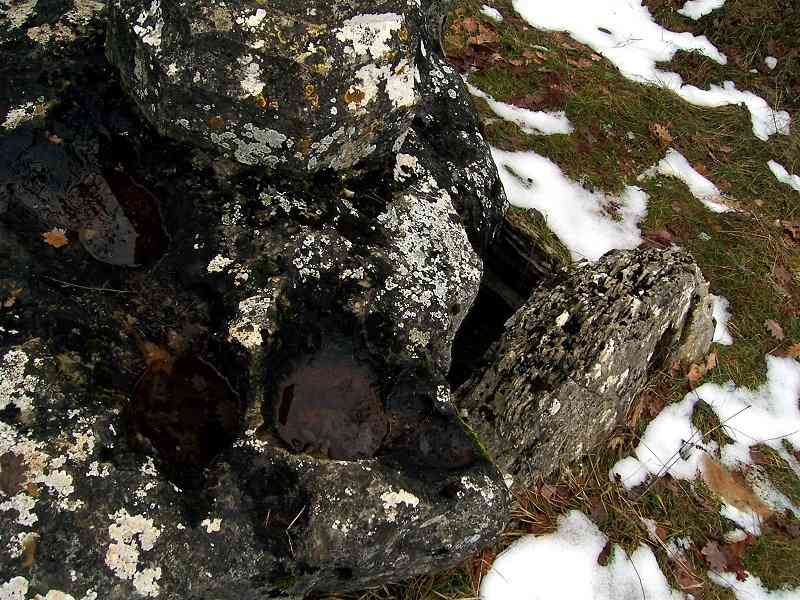 A view from the S side showing some of the water-filled solution-pits which recall Irish
bullauns.

2. Some 12 kms N of the embedded dolmen, just outside the village of Saillac, at a fork on the road to Jamblusse,
is this characterful little standing-stone, Christianised rather more tastefully than the dolmen above.
As with the Menhir de Mourrens, this menhir may originally have been somewhat phallic. 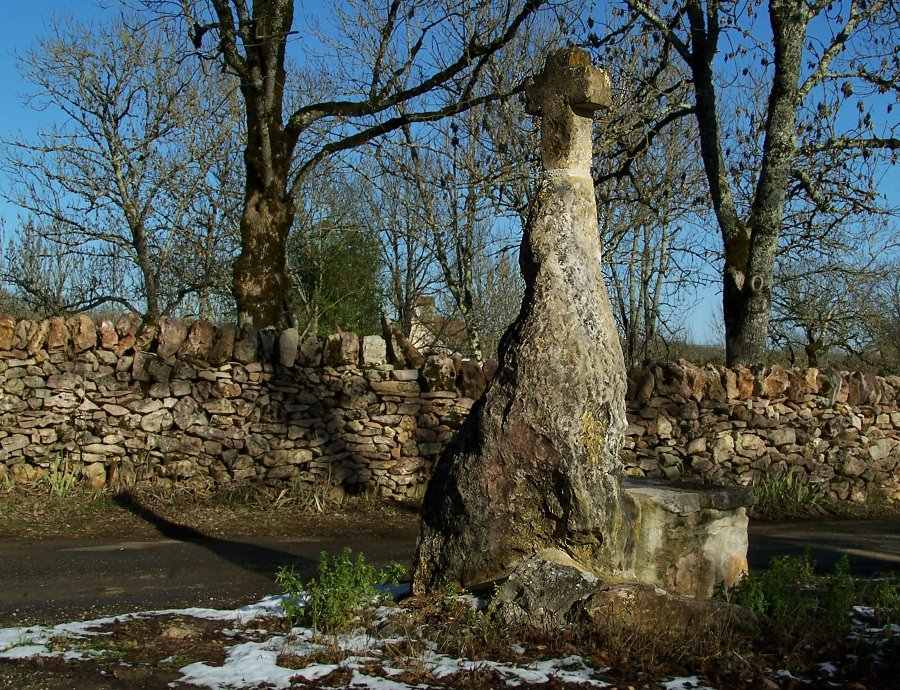 It is about 2 metres high, and has a little altar on the E side.

Click for a megalith that has affinities with both these monuments >

Between the two Saillacs is the grotto of Notre-Dame de Livron, an ancient site now desecrated by an ugly church,
hideous summer accommodation, and a garish statue of the Virgin. From the grotto gushes a stream which feeds into the Bonnette,
the ancient boundary between Quercy and Rouergue.

The site is to some extent redeemed by the tombs placed on the rocky cliffs above the grotto,
which turn it into a grotto-necropolis.

It is worth mentioning that most of the simple unadorned Latin crosses of stone which are frequent at road-junctions
have nothing to do with Christianity, but are termon or geographic markers erected in the 16th and 17th centuries.

Websites listing the attractions of the area mention various dolmens which have since disappeared or turned to rubble..
These include the Dolmen de la Rouquette at Crouzelles, a couple of dolmens in Les Saillades,
and the Dolmen des Clouts Grands near Jamblusse, which has been destroyed by military personnel in the training-Camp de Caylus.
Military engineers have, however, erected stones, some of which may come from this dolmen.
One appears as an impressive standing-stone on the corner of a forbidden and recently-constructed military road
and the entrance to a former firing-range. 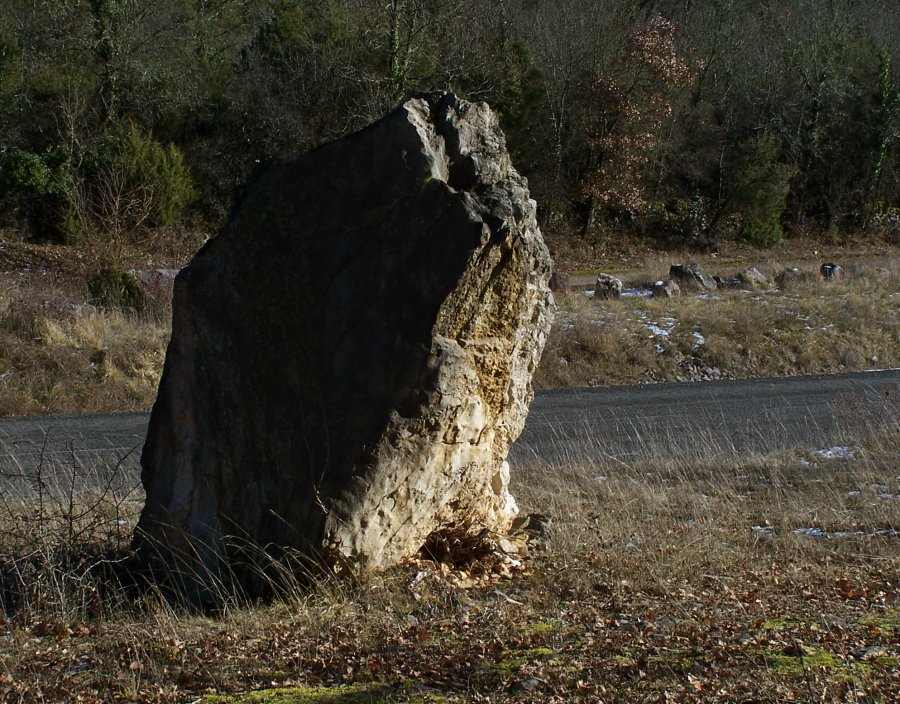 Another construction is a kind of stone mushroom, behind which can be seen a casella with unusually high entrance (perhaps recently enlarged). 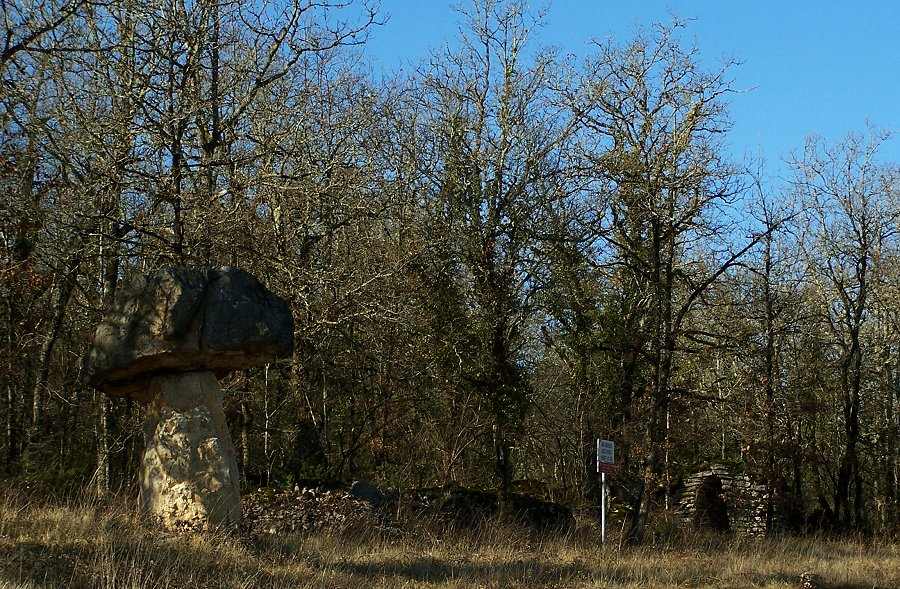 A fifteen-minute drive North of Caylus is the handsome, roofed dolmen with part of its cairn remaining, at Saint-Projet >

About 15 kms West of Caylus, along the D.926 in the direction of Caussade and Montauban,
are several tombs at Septfonds >