While the figure at Rath was part of a window-sill, this is a window-top (apex) and is the only surviving stone
from Tomregan Round Tower (bell-tower and observation-post) which was part of a destroyed monastery.
It is unclear whether the contortionist torso-less figure is male (showing scrotum) or female (showing labia),
but is most probably the former, since the face is moustachioed and seems to have a little beard.
The buttocks are seen as from behind, while the head - typical of late Irish Romanesque figures - is seen frontally.

It resembles a Blemya, but a rather more baroquely-complicated one than another enigmatic example at Saint-Antonin-Noble-Val.
Two toothy, Hellish monsters bite the figure's hands - so it seems to be a clerical comment
(enthusiastically carved by a good sculptor in the Norse-Irish style) on the 'goings-on' at markets, fairs and festivals.
The fair at Donnybrook near Dublin was the subject of condemnation right up to the end of the 18th century. 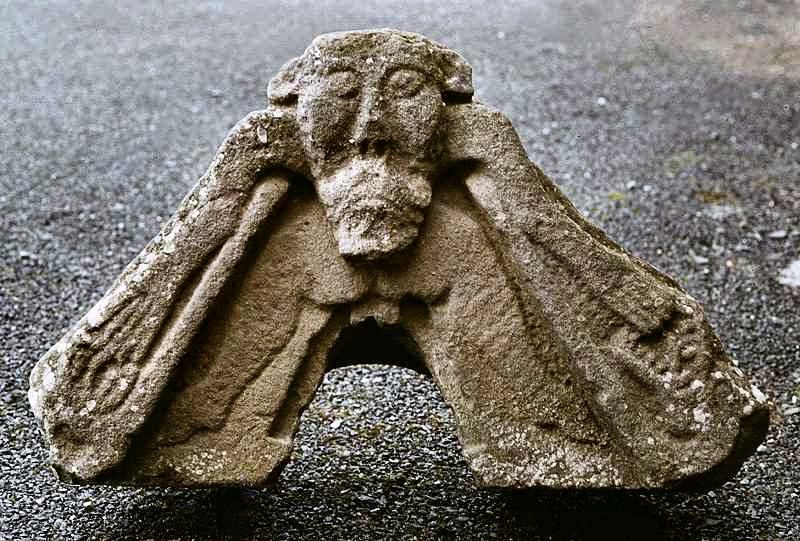 Another interpretation makes this out to be a portrait of bearded, tonsured, Saint Bricín (of Tomregan = Tuaim Bricín)
displaying his scrotum and holding a skull in one hand and a trepanning-saw in the other.
Such interpretation is typical of believing Catholics (especially in France),
who will invent any obscure (or obscurantist) explanationrather than see the obvious.

A simpler form of Blemya at Romsey Abbey (Hampshire). 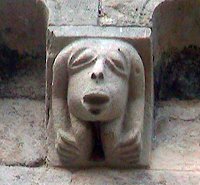 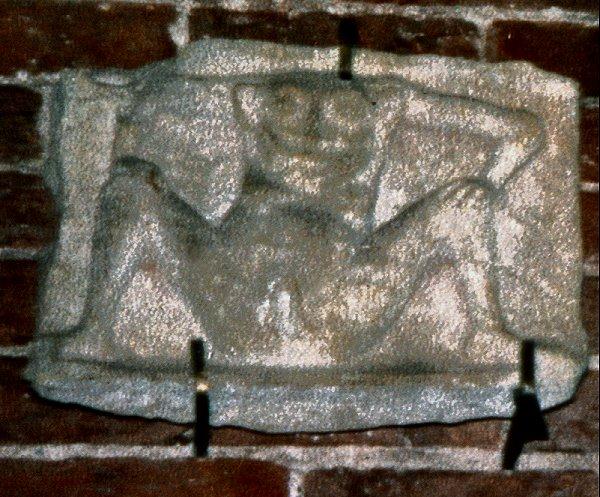 Here is a much better photo of the re-mounted figure.. 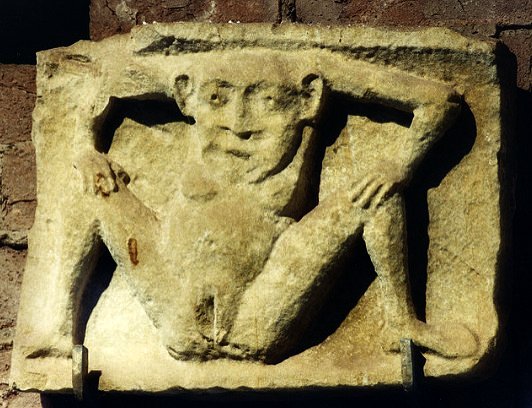 "On the old church of Marienhafen, in East Friesland, were numerous animals cut in stone
which adorned the portal and extended on the frieze entirely round the building.
The edifice was demolished in 1829..." (E.P. Evans, Animal Symbolisim in Ecclesiastical Architecture, page 235.)

The animal figures were all mediæval satires, such as beasts celebrating Mass and performing funerals,
the wolf at school, the burial of the fox, etc.
This sheela-na-gig figure was, presumably, the (or an) exception.

More information, on another site here.