In the temple of the Good Goddess on the Aventine Hill in Rome,
non-poisonous snakes roamed freely in the precincts to encourage the fertility of female clients.
At least as far back as Minoan times, snakes were associated with the life-giving powers of an Earth-goddess
(Gaia, Cybele, Terra, etc.).

In the later Roman Mithraic cults, the serpent symbolised the passage of the sun along the ecliptic.

The benign attributes of snakes survived their Judæo-Christian demonisation for a remarkably long time.

Thus a 9th century ivory book-cover possibly from Rheims depicts the Resurrection of the Dead
leaving rather Roman mausolea to join the saints in the New Jerusalem,
viewed with satisfaction by Oceanus (bottom left), Roma (a matron!) and Terra suckling a curling snake.
Interestingly, the snake-as-Satan also features at the base of the Crucifixion. 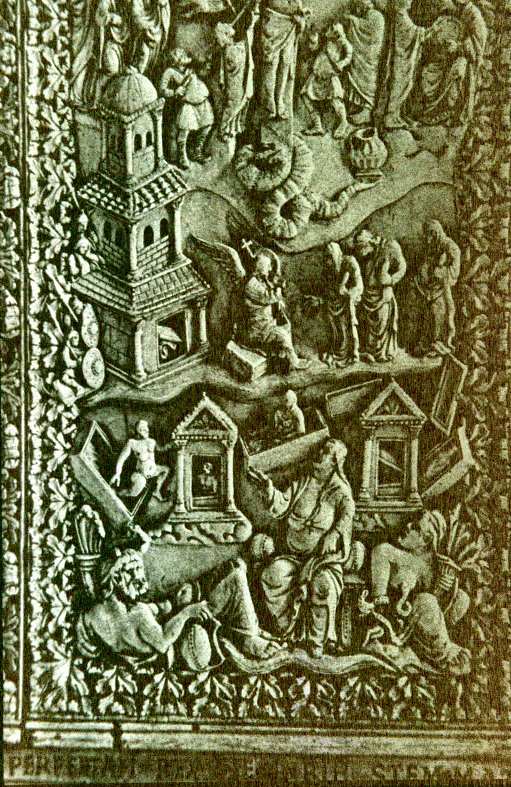 now in the Stadtsbibliothek in Munich

Even later, in the 11th and 12th centuries, on the psalm-sheets known as Exultet Rolls because their first word was Exultet (Rejoice!)
Terra (always decently clothed) appears nurturing various animals, including bullocks, does, stags and snakes.

from Monte Cassino, now in the Apostolic Library, the Vatican

This remarkable capital in the remarkable cloister of Benevento abbey in Calabria (Italy)
shows a naked Terra (with overtones of Luxuria, and without Cornucopia) suckling an ox and a snake... 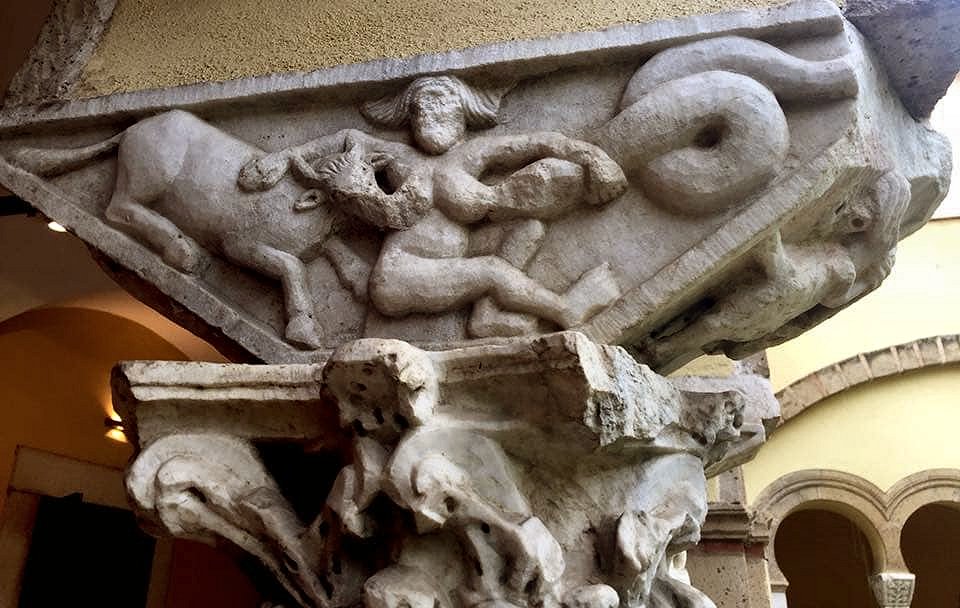 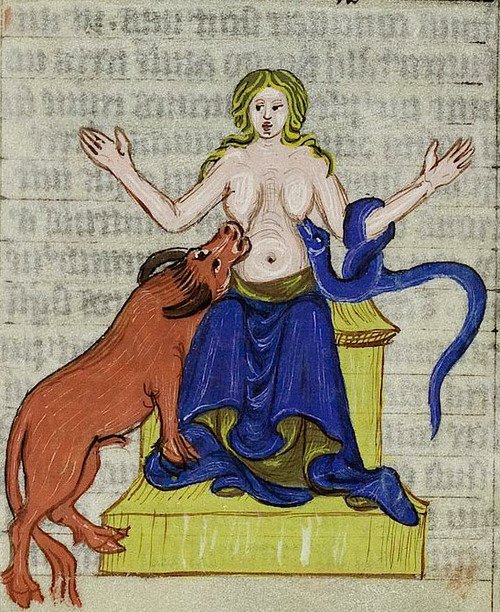 Another rare Romanesque example is on the central portal of the seminal,
Byzantine-inspired Basilica of San Marco in Venice,
where a braided Terra sits amongst stylised palm-fronds, suckling a snake.

At Riom-ès-Montagnes (Cantal) the snake entwines rather than suckles her on a twelfth-century capital,
but the sheaf of wheat is very obvious. She holds it together with an enigmatic unsexed but probably male figure.
Her cornucopia seems to feature apples (more appropriate in Auvergne) rather than grapes. 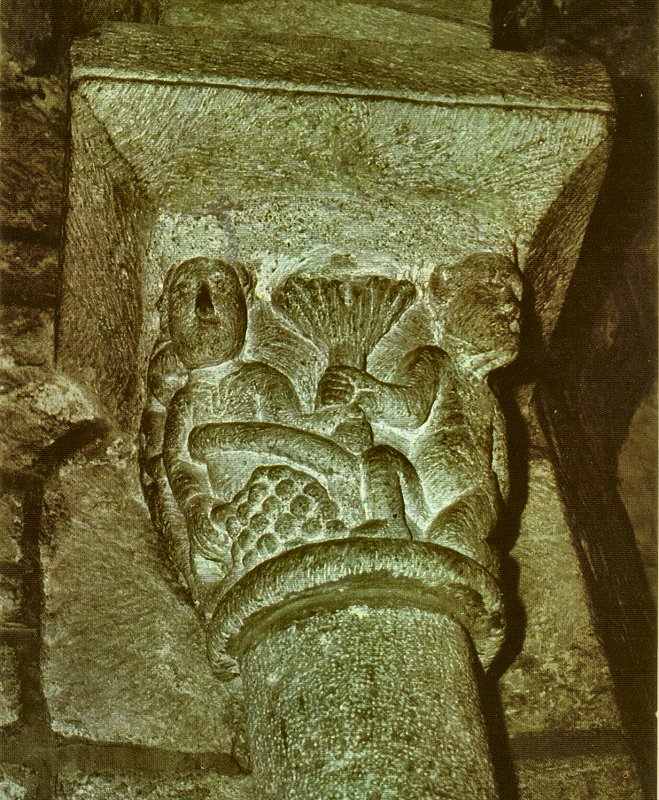 Click for Luxuria-figures with snakes and other "unclean beasts" >


At Benevento Terra suckles a stag and an ox. In a Mount Athos manuscript she suckles a unicorn.
For other examples, see Images of Lust, page 67.

But there is another strand to the iconography of snakes:
the Mithraic.

This Mithraic altar from the late Roman period in south-west France depicts a lion-headed human male-ish figure,
wearing a kind of mini-skirt, with lion-headed serpents entwining its legs.
The serpent represents the journey of the sun (the ecliptic),
and the lion represents the fourth of seven stages of initiation into the cult.
The key he is holding represents the knowledge which will lead him to the final stages, opening the doors to wisdom. 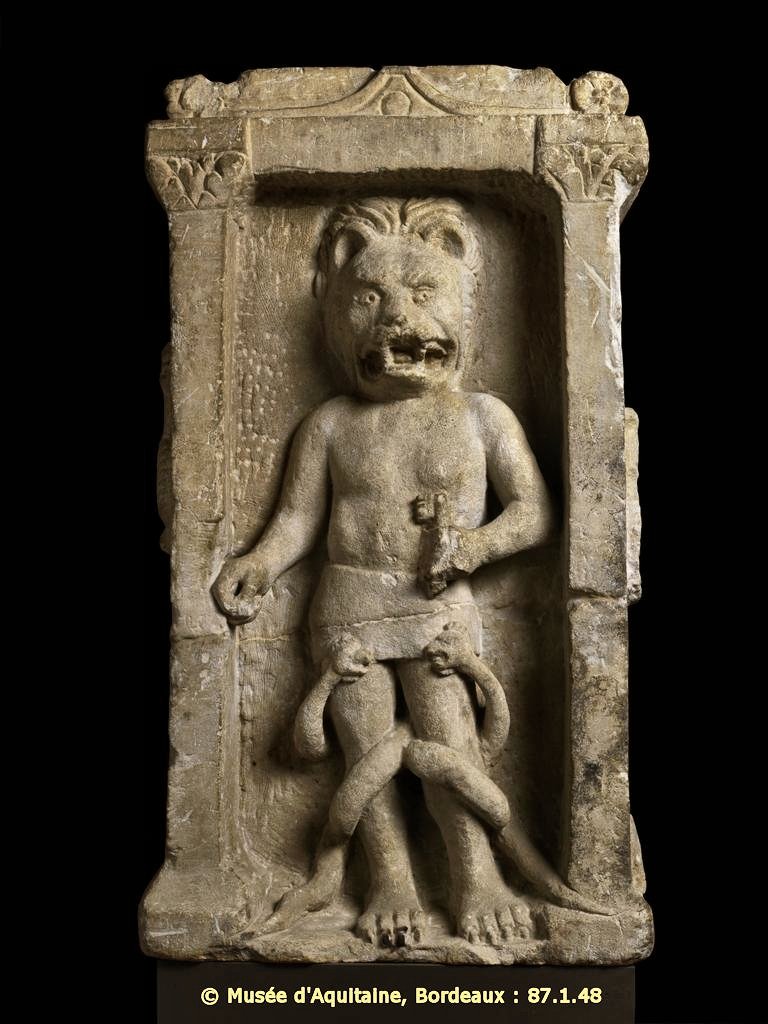 Mithras was a deity with loose connections to Mithra and Persian Zoroastrianism,
about whose cult there is good information on Wikipedia.

It was to Romans of the first to fourth centuries rather like Freemasonry to business and professional men
of the 19th and 20th centuries.
It was an exclusively masculine affair, with members drawn from the middle ranks of the governing and military (hierarchical) classes.
As with Freemasonry, status within the cult probably assisted status in one's profession and/or society.
Practised in small, usually subterranean places, including caves, it involved serious ordeals in stages, of which the fourth
is thought to be the one most commonly reached. The number seven refers to the planetary bodies: sun, moon and five visible planets.

The central rite of the (chthonic ?) cult was the slaying of a bull representing the creation of the cosmos.
The serpent represented evil, as in Christianity. But early Christians, who sometimes shared buildings
with other cults, including Mithraists, managed to suppress the cult quickly after they gained power
following Constantine's conversion and Theodosius' terrible decree outlawing all other religions. 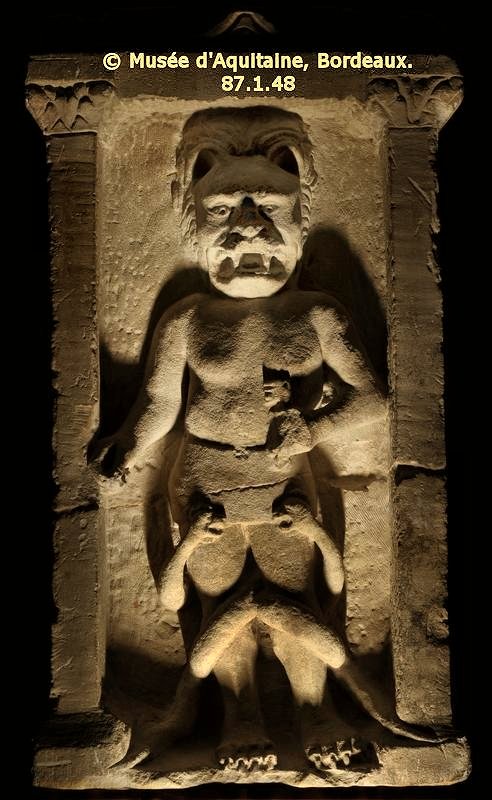 It may well have been lit from below in an enclosed space, adding a touch of terror to its sanctity,
just as gory crucufixions concentrate the mind on Christian mysteries.

A key is also carried by a unique male exhibitionist in Ireland.